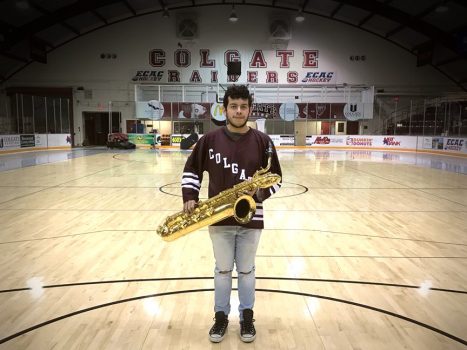 Ryan Rios, holding his Baritone Saxophone, in Starr Rink, where the Raider Pep Band rehearses. Ryan is the secretary for the band.

This interview was conducted with Ryan Rios, a sophomore in the Alumni Memorial Scholars Program intending to double major in Japanese and Computer Science. This past summer, Ryan researched how websites determine what language to display their content in.

Could you tell me a bit about your high school experience? What kinds of things were you involved in? How has that translated into your involvement at Colgate?

I went to a small all-male Lasallian school known as Cathedral High School in the heart of Los Angeles, right by Dodger Stadium. The school didn’t really have any clubs to speak of, but I was involved in my high school’s pep band- where I learned to play the sax- concert band, drum line, and jazz band- where I started playing bass publicly and not just in my room. Jazz band was my favorite extracurricular activity because it’s how I came to love jazz music, and there aren’t many more things that I like more than playing bass in a jazz setting. I’m still in pep band and jazz band at Colgate, and I honestly think that if it weren’t for joining pep band last year, my experience here would be very different.

My love for jazz music has also turned into me hosting two different radio shows with WRCU this semester after having done only one show last year. One show I host by myself and try to play a mix of jazz and rock (Wednesdays 10-11 AM EST), and the other show I host with a really good friend and we try to play jazz from a variety of eras while throwing in a few non-jazz songs here and there (Thursdays 3-4 PM EST). Like a lot of other people here, I took a lot of AP classes in high school and I think that helped prepare me for the rigor of some the classes here at Colgate. 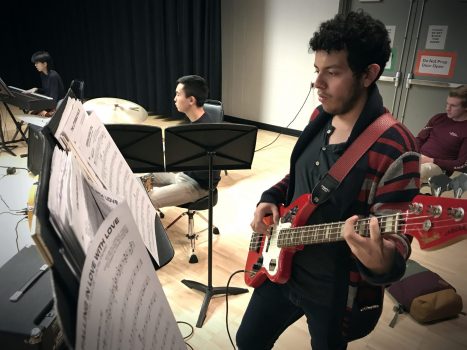 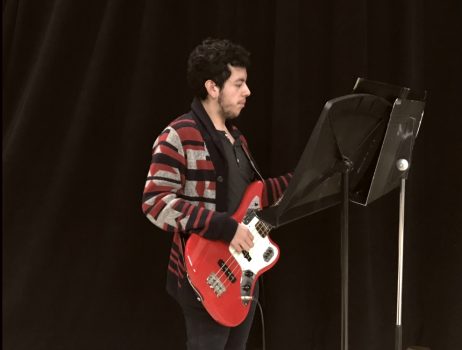 What are you involved in at Colgate? What kinds of classes have you taken? What has been your favorite thing to study?

At Colgate, I’m involved with pep band, jazz band, the student wind ensemble, Smash Club, WRCU, and ballroom. Pep Band definitely takes up most of my time, but I’m happy being in it because it’s where I’ve met some of my closest friends—not just at Colgate, but in general.

Aside from the core classes, I’ve taken computer science and Japanese classes, and not much else because I took two core classes my first two semesters and two computer science classes this semester. My FSEM was Cities of the Silk Road, which was a history class on civilizations that were along the Silk Road. I thought it was interesting because it the class was on a part of the world I hadn’t really taken a class on, and being able to make food from that part of the world for class was a fun experience.

I also really like my Japanese classes because they’re smaller than the already small classes at Colgate and most of my friends that I didn’t meet through pep band I met through my Japanese classes. Computer science can be stressful, but I don’t mind most of the time because it’s a subject I’m genuinely interested in. My Japanese classes have by far been my favorite though. The professors in the department are all very approachable, and learning a language that is so different from English can be hard but it’s rewarding, especially when you pick up something like a children’s book or watch a children’s show and can get a general idea of what’s going on. 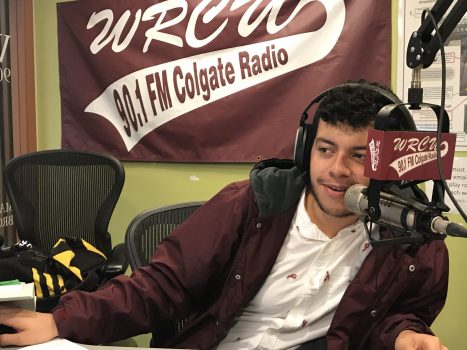 What made you decide to work at Colgate this summer? Could you tell me what kind of work you did?

I wanted to work at Colgate this summer because I didn’t have anything else planned for the summer and I figured that getting research experience as a rising sophomore would be a good thing to do. The research I did was with the computer science department. I had genuine interest in the project I ended up working on, which was led by Professor Sommers.

I learned how to do things that I didn’t learn in the classroom. When someone uses the internet, whatever website is being visited has multiple ways to choose what language to display the content of the page in. It isn’t always clear which websites use which methods though. Some websites use the geographical location of the user, others base it off what language the user has indicated they would prefer to see content in through the settings in their browsers, and others still might base it off of what the user has said they preferred during a past visit to the website. It could also be none of these things, but it’s difficult to say definitively one way or another.

My research partner and I had to write a program that would visit websites ranked by popularity according to alexa, and tell us what language the content was displayed in taking into account what languages we said we wanted to see and whether or not we were using a proxy- and if so, from where. Professor Sommers is still doing research, as we were doing a lot of the preliminary work, but a lot of websites seem to not follow the general guidelines web developers agree should be followed.

Admittedly, it’s not something I’ve given much thought, but I might be using my AMS funding to go to Japan roughly a year from now. I’ll be studying abroad there next semester, which I’m definitely excited for- although I’m not exactly sure what I would want to do in Japan with my AMS funding. I might go to a language school, but I haven’t decided that that’s what I want to do. One of the focuses of my study abroad group is sustainability in more rural areas of Japan, so I might try to investigate how technology has impacted and continues to impact rural Japan. However, I don’t know how feasible that would be with such a great language barrier, as Japanese as it is spoken in urban Japan is very different from Japanese as it is spoken in rural Japan. Regardless, I hope I get to do something related to that! 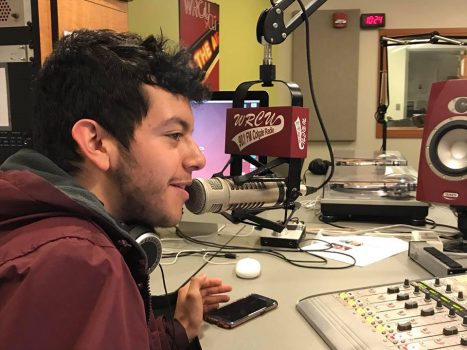 What are some of your favorite things about studying at Colgate? What do you think can improve? Do you see yourself playing a role in that improvement over the next three years?
I really like that the classes at Colgate tend to be small, so it’s easy to find people to befriend and study with. Also, if anything, most of the people here seem to really take their studies seriously which I will admit was a pleasant surprise. So many people in my classes are also just really approachable, and I don’t think I’ve ever felt like I haven’t had anyone to interact with in a particular class while at Colgate. We’re all willing to help each other for the most part, and while there’s friendly competition between people I’ve never gotten the sense that someone thinks they’re too good to help other people when asked to or anything like that. The upperclass people also seem more than willing to help the underclass people, and it’s really nice to have people, who’ve been through what you’re struggling with, take a genuine interest in helping you.

I think that the core curriculum could definitely be approved. A lot of the reading assigned for Legacies of the Ancient World, specifically, is by European white men. I think the texts we read in that class were definitely worth the read, but it feels as if the class doesn’t embody the concept of “the ancient world” when most of the readings generally don’t reflect the entire world. I would appreciate if more of the readings came from different parts of the world, which my professor definitely tried to do. I don’t know exactly how I would go about enacting that change, but it would be nice to help with that change.

Have you thought about what you’d like to do after college?

The research I did this summer left me interested in how people who are either multilingual or come from a non-English speaking area use the internet and how the internet can be made more accessible for them. In general, I think that making technology more accessible for people that don’t speak English is interesting because we tend to forget that not all of the world speaks English, and it’d be cool if technological innovations weren’t always held back by a language barrier from spreading into more parts of the world. This obviously shouldn’t be an issue with huge companies, but at the same time you run into issues where if you purchase something in the United States you might be forced into using that product in English. It’s not an issue for most people, but many people in the US don’t speak English either, so it’d be interesting to see how we can help knock down language barriers in our world more and more. 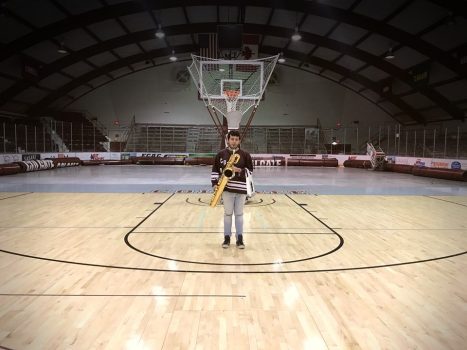