Czech history is filled with the number eight. The founding of Charles University in 1348; the Second Defenestration of Prague in 1618; the establishment of Czechoslovakia in 1918 and its first demise in the Sudetenland Crisis of 1938; the communist takeover in 1948; and the Prague Spring in 1968. “Any year ending in ‘8’ is a special year,” my cab driver joked on the ride from the airport. This year seems particularly special: 2018 marks both the centennial of Czech national independence, and the 50th anniversary of the Prague Spring. I wanted to see for myself how these commemorations would play out in Prague itself, where the cobblestone roads of the Old Town wind amid gothic steeples and baroque theatres and recede into the mists of history. 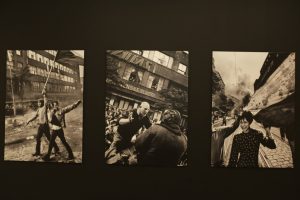 Some of Josef Koudelka’s photos of the Prague Spring, on display at the National Gallery in Prague

I arrived in Prague during a grey and chilly week in mid-November. I knew that the parades and speeches had probably finished by the time I arrived, but I was still to hoping to find out how the Czech people remembered these watershed moments in their past. As an immigrant from a communist country, I was particularly interested in examining the narratives around that period of Czech history, especially the events of the Prague Spring. In my history classes, including one at Colgate University with Professor Nemes, I had always gotten the idea that the Prague Spring was a particularly heroic period of the Cold War, a David versus Goliath struggle between the forces of liberality and freedom and Soviet oppression. I wondered what kind of pride the Czech people must feel for their brave stand during this period.

What I found surprised me. The narrative from the side of the Czechs turned out to be very different from my own impressions. Far from celebrating the Spring, Czechs seem to see the events of “68” as a national tragedy, where their country was invaded and occupied by the armies of their ostensible allies, and civilians perished in the streets of Prague. Some even consider the immediate aftermath of the Spring, when the Czech leadership was forced to renounce their own supporters and repudiate their own reforms, to be a national humiliation. Milan Kundera expresses this sentiment in The Unbearable Lightness of Being, in the reflections of the main character Tereza:

It was the seventh day of the invasion. She heard the speech in the editorial offices of a newspaper that had been transformed overnight into an organ of the resistance. Everyone present hated [Czechoslovak President] Dubcek at that moment. They reproached him for compromising; they felt humiliated by his humiliation; his weakness offended them.

This translated into the very subdued remembrance for the events of “68” that I was able to personally observe. During my visit, there was a photography exhibition about the
Spring at the national gallery, and another exhibition about the fighting around the Czech Radio building during the invasion of the city at the National Memorial on Vitkov Hill. However, other discussion of the Spring was surprisingly sparse. For example, during a walking tour of the Old Town area, my guide emphasised the role of Wenceslaus Square during the struggles for Czech independence in 1918 and 1989, but never mentioned the mass demonstrations and protests that took place there in 1968. Similarly, a special exhibition on the history of the Czecho-Slovak state at the National Museum, put on for the centennial of independence, failed to make much mention of the Prague Spring. Finally, in a town filled with memorials – to kings, wars, religious leaders, generals, etc. – I could not find any dedicated to the Prague Spring.

Instead, the only “monuments” I found was a small memorial to Jan Palach and Jan Zajic, two students who committed suicide by self-immolation to protest the Soviet invasion and occupation; a plaque on the Czech Radio building that recorded the names of civilians who had been shot trying to defend it from Soviet soldiers; and the Memorial to the Victims of Communism, hidden away in a corner of Petrin Park.

In the west, there is a tendency for struggles against tyranny and oppression to be romanticized as particularly righteous or heroic events. This comes, I suspect, from the ideological struggles of the Cold War, which pitted western democracy against Soviet authoritarianism, and depicted events like the Prague Spring or the Hungarian Revolution of 1956 as movements of fearlessness or even martyrdom to inspire continued resistance against the communist threat. However, in the post-Cold War era, when western societies have begun to realize the harms of appropriating other peoples’ experiences, and when cultural authenticity has become an ideal in academic discourse and narratives, it is time to re-evaluate the narratives surrounding events like the Spring, and portray them with greater regard for the human costs and suffering that these struggles incurred. When one considers the casualties of the 1968 invasion and the subsequent crackdown, it is perhaps not so surprising that the Czechs do not share our enthusiasm for that episode of their own history.

Prague itself seems to bear very little traces of the tumult of the past century, however. Much of the city proper still retains a gothic or baroque appearance, and, for a city with some 1.3 million people, there is a conspicuous lack of tall buildings or skyscrapers in a skyline that is appears to be only punctuated by spires. Much of this can be attributed to the fact that Prague was largely undamaged during WWII, and consequently did not require much reconstruction and redevelopment during the postwar communist era. Looking over the city center from the Zizkov television tower observatory, itself perhaps the only easily visible vestige of the communist era in Prague, I noticed a distinct lack of the tell-tale markers of a communist past, such as the concrete apartment blocks ubiquitous across the former Eastern Bloc. There are incongruous vestiges of the communist past in surprising places, however, such as the Kotva Department Store building, built in a neo-Brutalist style during the 1980s and now a mall, which is nestled amongst the medieval and baroque edifices of the Old Town. 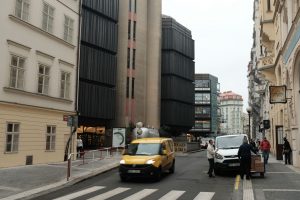 The brutalist façade of the Kotva Department Store, one of the few relics of communism in the Old Town area

The communist period has had less tangible, but no less significant, impacts on the Czech people and their society. One important example is how, after some 40 years of religious suppression, the Czech Republic is now one of the most atheistic countries in the world. This is in spite of the hundreds of churches, monasteries, cathedrals, and basilicas present in Prague, and the significance of religion in Czech history, especially the frequent clashes between the Catholic church and various reform movements such as Hussitism and Protestantism. 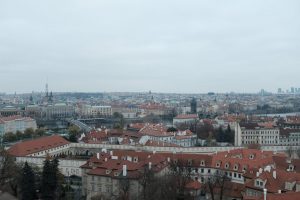 Despite a mostly irreligious population of over 1.3 million, Prague’s skyline continues to be punctuated by church spires, as it has been for centuries

During the communist period, institutions such as the Catholic church were allowed to exist, but their activities were severely curtailed and monitored, while their physical assets, including lands, monasteries, and the churches themselves, were nationalized. As a result, “only the very old still practice religion,” a Prague resident told me. “The churches are mostly for the tourists now.”