The Association of Writers & Writing Programs (AWP) Conference and Bookfair marks the center of every professional writer’s calendar year. As listed on the AWP homepage, this annual conference boasts over 12,000 attendees, 2,000 presenters, and 550 readings, panels, and craft lectures, thereby making it the largest literary conference in North America. This year, it was hosted in Portland, Oregon, and I, like Charlie Bucket receiving his golden ticket to Willy Wonka’s Chocolate Factory, was awarded an AMS grant to attend it.

Writers of all genres, ages, genders, ethnicities, and professional levels crowded the Oregon Convention Center, all toting haphazard combinations of books, notebooks, laptops, and other writerly accoutrements. The whole center smelled of vintage clothing and used book stores, and I couldn’t help but to stare wide-eyed at the people who Iacco strived to someday become. As an English creative writing major currently in the process of writing her creative writing honors thesis, I could not have asked for an opportunity better suited to my studies or post-graduate plans. 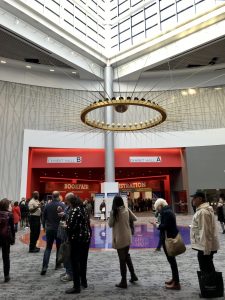 The Oregon Convention Center, located just to the east of the Willamette River, boasted over 12,000 attendees over the span of the AWP Conference and over 550 events.

The conference itself spanned four days, each of which was packed with back-to-back sessions about everything from Pacific Northwest female writers’ speculative fiction to crossing genre boundaries in memoir—two sessions that I attended during my time there. I watched famous writers discuss topics integral to the study of creative nonfiction, such as the ethics of publishing stories about co-owned experiences, how to craft an engaging writing persona, and the difference between fact and truth in the expression of personal experience. Since I primarily write creative nonfiction, these discussions forced me to critically analyze my own work, making me more aware of the power a writer holds over both the subjects of her writing and reality itself.

Though most of the lectures I attended focused on nonfiction, I also used this conference to cross genre lines and broaden my creative skill base. For example, I attended craft lectures about playwriting, delivered by such eminent playwrights as Deborah Jordan and Craig Thornton. In these, I learned craft terminology that I had never heard before, like a “Passover question,” “iceberg characters,” and dramatic structure.

Most excitingly, during one of the AWP Conference sessions, I got to meet the famous writer Phillip Lopate, author of the iconic collection of essays, To Show and to Tell: The Craft of Literary Nonfiction. This book is integral to any student’s creative writing education—my own included—and seeing the man behind the essays was surreal. Lopate’s witty, articulate, and wickedly funny persona came to life as he discssed how to talk about oneself in nonfiction. In this panel, Lopate and other award-winning writers, like Ana Maria Spagna and Yi Shun Lai, explored the necessity of reflection, introspection, and—surprisingly enough—speculation in nonfiction. They put into words a lesson I have been trying to learn my entire Colgate career: constant self-analysis, imagination, and critical thought are necessary to find shape and meaning in one’s experiences and, therefore, to make them worthy of being written. 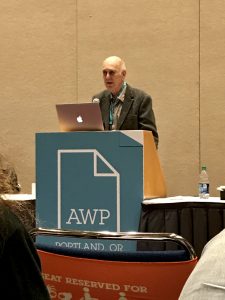 Born in Brooklyn in 1943, award-winning writer, professor, and editor Phillip Lopate has written over fifteen publications, spanning from novels to memoirs to biographical monographs and beyond.

This brings me, necessarily, to what I found most impactful about my time at the AWP Conference: not only did it hone my writerly craft, but it also expanded the way I thought about writing as integral to the humanities—to humanity itself, even. In addition to sharing an eccentric and oftentimes psychedelic fashion sense, something else bonded the AWP attendees, something ineffable. We were not just a group casually interested in the same activity; instead, we were connected by a hunger to explore the human condition.

What makes a person tick? What drives human society? What connects us to the earth? How do we shape our identities, and how can we derive meaning from this process? every panel seemed to ask in one way or another.

I felt this human element of writing most keenly in a panel called “Write to Climax: Women Writers on Writing Sex and Intimacy.” In this panel, female authors discussed how they reclaimed their sexuality through their writing. Writer Luanne Smith roused a hearty cheer with her assertion, “My climax is mine. My right to a climax is mine. My right to write about my climax is mine,” while Kate Daniels probed the nature of all human relationships: “Writing about sex allows us to complete the human experience.”

Halfway through the panel, Pam Houston, who recently published her sixth book, a memoir called Deep Creek, stood up and read a piece about being repeatedly molested by her father as a child. She announced that that was the first time she had ever read the passage out loud.

The entire audience leapt up from their chairs at the end of Houston’s reading. Applause ricocheted from the cavernous ceiling, compounding our already welling emotions. As I stood and clapped, I felt that I had not just learned about writing; I had learned about living. There I was, participating in a deeply human moment in which hundreds of people celebrated human endurance, the healing power of writing, and our ability to use art to support one another in a troubled world.

Though the conference was a boon to my writerly humanity, skill, and knack for literary “fangirling,” the icing on the cake was the AWP Bookfair, which contained booths for over 800 international journals, presses, MFA graduate school representatives, and literary organizations. In one giant, open-plan room, thousands of people packed in rows filled with brilliant book titles, vibrant covers, and informational pamphlets as far as the eye could see. Tin House, American Poetry Review, Hong Kong Review, The Sewanee Review and more lined my star-struck vision. It was in this room, too, that I talked with MFA graduate students from programs such as Johns Hopkins, Emerson College, and Northwestern University about their experiences studying creative writing. 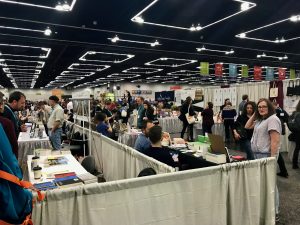 Located in the center of the Oregon Convention Center, the AWP Bookfair hosted over 800 journals, presses, MFA graduate school representatives, and literary organizations from around the world.

I chatted with these fellow writers and publishers about their craft and about the publications that excited them most. A fellow undergraduate student from Michigan State University, the managing editor of her school’s publication, The Offbeat, even suggested that I take a trip to Powell’s City of Books. I took her advice without hesitation. Later that afternoon, I found myself in the world’s largest independent bookstore. Labyrinthine mazes of bookshelves, book displays, half-staircases, and coffee-catered reading nooks wound within the seemingly plain façade. As I wandered through the aisles, fingering the pages written by thousands of writers over hundreds of years, I closed my eyes and sighed. Maybe someday, my own book would appear on its shelves.

The AWP Conference made me believe that someday it could.

Erin Hoffman grinning like a madwoman inside Powell’s City of Books, the world’s largest independent bookstore, located in the heart of downtown Portland.