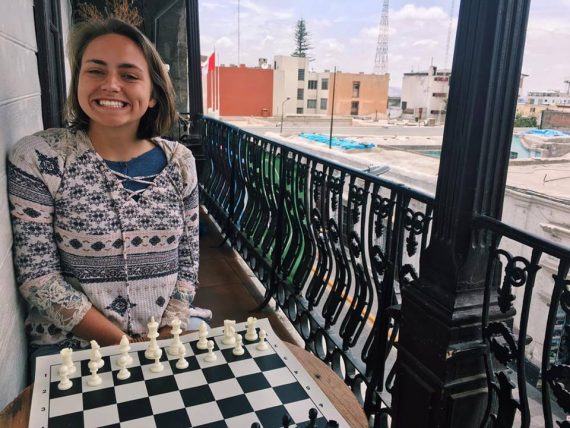 Benton Scholar Jenny Lundt ’19 knows chess. She’s also an experienced traveler. So, during the winter of 2017, she combined her interests into a Benton Mini-Grant project. Her proposal took her to South America, where she “backpacked through Peru with a chess board.” Chess, she discovered, isn’t just a game. It’s a way of bringing people together, facilitating communication across cultural and linguistic barriers. What follows is Jenny’s reflection.

I started like I had done a thousand times before.

The usual things. Clothes, shoes, shampoo, trail mix, portable charger: all find a niche in my backpack after a plethora of experience being hauled around the world. But this time was different. This time, I would be traveling with a chess board.

Throughout the course of my world travels, I have found that chess is global. No matter your race, gender, age, or ability, chess is played. For instance, during a visit to Ukraine last summer, I joined a tournament of old men, simply by motioning. This made me realize how a game about war is also connected to peace.

As a Peace and Conflict major at Colgate, this really interested me and made me want to learn more. So, I applied for a Benton Scholars “Mini Grant” and made chess the purpose of a trip. For three weeks during the winter of 2017, I backpacked through Peru with a chess board, setting it up wherever I was and waiting for an opponent. There was no clear plan, other than  to wait and see if anyone wanted to play.

The experience was everything and more I could have hoped for. A few highlights:

I confirmed my theory and came away with experiences that I would never have predicted. Whether it was physically playing the game or the physical proximity that the occurrences lead me to, I can say with complete certainty that this adventure brought me to people and stories I wouldn’t have had otherwise had.