The Founder of Labor Day

Labor Day, observed on the first Monday in September, is a celebration of the achievements of American workers. It is a yearly tribute to the efforts Americans have made to the prosperity, strength and well-being of our country. 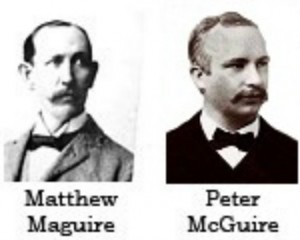 But who first started this annual celebration?

Well, that depends on who you ask.

Americans have been celebrating this holiday for over 100 years, and yet there is still some doubt as to its founder.

Some records show that Peter McGuire, general secretary of the Brotherhood of Carpenters and Joiners and a co-founder of the American Federation of Labor, was the first person to propose a day,  “…dedicated to peace, civilization and the triumphs of industry.”

However, many believe that Matthew Maguire, a machinist, and not Peter McGuire, founded the holiday. Certain records show that Maguire, later the secretary of Local 344 of the International Association of Machinists in Paterson, N.J., proposed the holiday in 1882 while serving as secretary of the Central Labor Union in New York.

Regardless of its founder, The Central Labor Union adopted a Labor Day proposal and appointed a committee to organize a demonstration and picnic in 1882.

And ever since, Labor Day has been celebrated in much the same way as in its beginning – with parades and picnics.