Rethinking the Response to the Great Recession

By Department of Economics on April 1, 2019
Shortly after Colgate University Professor of Economics Thomas R. Michl published a paper, “Hysteresis in a Three-Equation Model,” documenting the potentially permanent negative effects of economic crises like 2008’s Great Recession, his macroeconomics students posed a question:

What should we do about it?

Michl and Kayla M. Oliver ’17 decided to find out. In a new paper, “Combating Hysteresis with Output Targeting,” published in the January 2019 Review of Keynesian Economics, Michl and Oliver make the case for a new macroeconomic approach during economic downturns.  Read the full article by Rebecca Beyer here. Colby Kingston ’18 in Economics featured in the Colgate Magazine More than finance, banking, and business…where can studying economics take you?

Prof. Kato Has a Top Downloaded Article in BJIR

Class of 2018 Honors Students in Economics

The following students from the  Class of 2018 have earned the honors designation in the Economics Department after successfully completing their honors thesis (3 of which earned high honors):

Baiyu Zhou, “Who are the job leavers and why do they quit? Evidence from the manufacturing firm” (Faculty Sponsor: Takao Kato)

The faculty and senior economics majors had a fun time playing softball at the annual end of the year faculty/senior softball game and picnic. The weather cooperated and the delicious food was supplied by Bueno Taco. 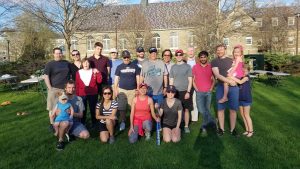 All economics majors are invited to the department’s faculty-student happy hour Thursday, April 12 from 4:30-6:30 pm at Donovan’s Pub.  Come enjoy refreshments with your favorite economics professors!

Economics Professor Rick Klotz will be one of the panelists at the Green Summit on April 12 from 4:30-6:00 pm in the Golden Auditorium

By Department of Economics on September 20, 2017

Professor Michael Haines, the Banfi Vintners Professor of Economics, was recently honored by the Economic History Association as the inaugural recipient of the Robert Gallman/William Parker Award for Lifetime Achievement in Data Preservation. Michael received the award at the Annual Meetings of the Economic History Association in San Jose, CA on September 16, 2017. The award recognizes Michael for his contributions to the field of economic history and his efforts in collecting and preserving economic, population, and agricultural census data in the United States and Europe in the 19th and 20th centuries.  Congratulations to Michael for this well-deserved award!