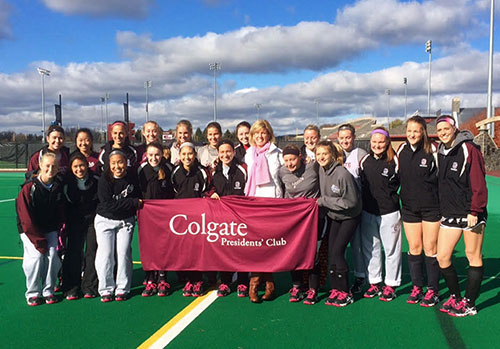 Amy DiSibio ’86 with student members of the Presidents’ Club.

Since last semester, seven student leaders have been promoting the Presidents’ Club among undergraduate students and have so far encouraged more than 600 students to contribute $13.00 each in order to become members.

In early February, the Presidents’ Club student leadership group merged its efforts with the Giving Circle, Colgate’s undergraduate philanthropy council focused on educating their peers on the importance of giving back to Colgate. Led by Annual Giving Coordinator in Advancement Jessica Hootz ’13, the two groups rebranded as the Presidents’ Club Student Committee (PCSC).

Following the model of the President Club Membership Committee, the students of PCSC have divided themselves into three main sub-committees: Marketing, Education & Fundraising, and Event Planning, each of which is chaired by two co-presidents for one year. The PCSC is currently focused on preparing for its “Give for the ‘Gate” fundraising campaign during the week of April 4, culminating with Entrepreneur Weekend and Alumni Council Weekend at Colgate. Members of the event planning committee are also organizing a networking reception with Presidents’ Club alumni returning to campus for the weekend.