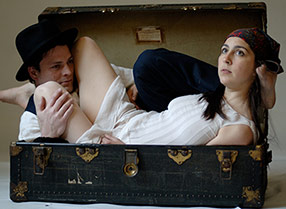 From February 3-8, 2014, Colgate will host a residency and performance by Headlong Dance Theater, a Bessie-Award winning modern dance company based in Philadelphia. The residency will include a colloquium on February 4, sponsored by the Division of Arts and Humanities, and two performances of Headlong’s piece Shosha in Brehmer Theater on February 7th and 8th.

Shosha, an adaption of Isaac Beshevis Singer’s eponymous novel, depicts the Jewish ghetto of 1930s Warsaw through the lens of 1970s New York, where Singer enjoyed the most productive period of his career. Simultaneously comic and sensuous, Shosha draws its movement vocabulary from vaudeville and contact improvisation, framed by stage imagery that the Boston Globe calls “striking and unforgettable.”

Founded in 1993, Headlong Dance Theater has performed nationally and internationally to a range of audiences, and the company’s work — informed by a deep commitment to collaboration, and formal experimentation — has won many fans and much acclaim. “Does experimental dance have to be intimidating?” asks Gia Kourlas in the New York Times. “Not according to Headlong Dance Theater, which likes to lace its cerebral offerings with sly humor… Headlong is clearly not your typical dance company, with dances in keeping with the troupes’s motto that intelligent experimentation can be compelling and, in some cases, hilarious.”

Headlong’s Co-Directors, David Brick and Amy Smith, have trained in modern, ballet, jazz, tap, contract improvisation, releasing techniques, theater, sports, sign language, Bharata Natyam, and Ghanaian dance. Drawing on these and other sources, Headlong creates dances that both reflect and comment on the blind spots and hot spots of our strange, contemporary times. For more about the Headlong Dance Theater, visit their website.

Funded by the Christian A. Johnson Endeavor Foundation.