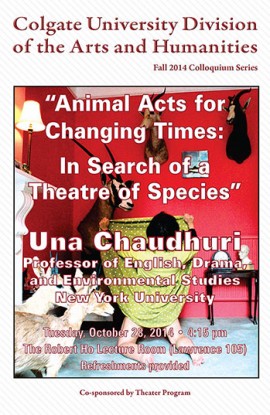 On Tuesday, October 28 at 4:15 in 105 Lawrence Hall, Professor Una Chaudhuri of NYU will deliver a talk titled “Animal Acts for Changing Times: In Search of a Theater of Species” as part of this semester’s Arts and Humanities colloquium series. As a complement to this semester’s University Theater production, Seeing the Beast, Professor Chaudhuri’s talk will address the use of animals and animality in contemporary theater and performance.

Una Chaudhuri is a Professor of English, Drama, and Environmental Studies at NYU. She is the author of No Man’s Stage: A Semiotic Study of Jean Genet’s Plays, and Staging Place: The Geography of Modern Drama, as well as numerous articles on drama theory and theatre history in such journals as Modern Drama, Theatre Journal, and Theatre. She is the editor of Rachel’s Brain and Other Storms, a book of scripts by performance artist Rachel Rosenthal, and co-editor, with Elinor Fuchs, of the award-winning critical anthology Land/Scape/Theater.

She was guest editor of a special issue of Yale Theater on “Theater and Ecology” and a special issue on Animals and Performance, for TDR: The Journal of Performance Studies (2007). Recent publications include Animal Acts: Performing Species Today, co-edited with Holly Hughes, and Ecocide: Research Theatre and Climate Change, co-authored with Shonni Enelow. With director Fritz Ertl, she has developed a number of theatre pieces using a process they call “Research Theatre,” and she has worked collaboratively with the artist Marina Zurkow, most recently in a multi-platform project entitled “Dear Climate.”

She chairs the panel of judges for the Callaway Prize for the Best Book on Drama or Theatre, and she has been a judge of the Obie and the Alpert Awards. She is a voting member of the American Theatre Wing, which awards Broadway’s Tony Awards.