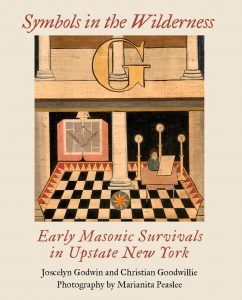 Freemasonry played a vital role in the social development of New York State. Its Lodges provided a trusted place for newcomers to meet and for friendships and business partnerships to develop, free from political, professional, and sectarian differences. During its explosive growth from 1790 to the end of the 1820s Masonic brethren produced iconic architecture, as well as extraordinary examples of folk art, expressed in large symbolic paintings (“tracing boards”), murals, textiles, and graphics. Most of these have remained entirely unknown outside the Upstate Lodges that, against all hazards, have preserved them. Their symbolism seems mysterious and confusing to outsiders, but once explained, it gives insight into a period and place unique in American history.

Joscelyn Godwin is Professor of Music at Colgate University. He previously published The Spirit House, or Brown’s Free Hall, in Georgetown, New York with the Upstate Institute. Symbols in the Wilderness is available for purchase at Couper Press.