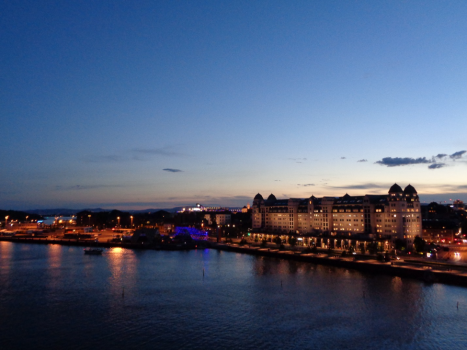 During my Spring 2017 Wales Study Group, I got to know more about the history of the United Kingdom and how different groups of people influenced the nation. I was eager to learn about the Viking invasion, because ever since I was nine or ten years old, I have always been fascinated by Norse mythology and Scandinavian culture. I can never forget the excitement of reading the Prose and Poetic Edda, or the heroic quests of Sigurd in the Volsunga Saga, a story which later inspired J. R. R. Tolkien to write The Lord of the Rings. Over ten years later, with funding from the AMS program, I finally had a chance to study their legacy in the United Kingdom and compare it with the portrayal of Vikings in their home nations of Denmark and Norway.

My first stop was York, a small city in northeast England, where the Danish Vikings established a territory covering most of eastern England called the Danelaw in the 9th century. York’s renowned attraction, the Jorvik Viking Center, doubles both as a museum and educational center about the Viking history of England. Experts even painstakingly recreated a Viking village to illustrate how they lived in the past, alongside a traditional display of archeological artifacts. Though the Scandinavian influence has been supplanted by later English communities, the Scandinavian past still remains in parts of York and surrounding areas. Most street names in the city end with ‘-gate’, such as ‘Coppergate’, as they were derived from the Norwegian/Danish word for ‘street’. Many place names in Yorkshire also contain the word ‘-thorpe’ or ‘-by’, which mean ‘settlement’ and ‘village’ respectively in Old Norse, further emphasizing their Scandinavian legacy. 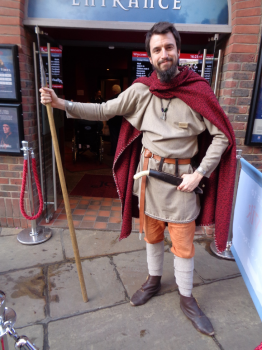 A Viking outside the Jorvik Viking Center

The history of Scotland is much more intertwined with the Viking kingdoms. I visited the National Museum of Scotland in Edinburgh and the Kelvingrove Museum in Glasgow, both of which contain sizeable exhibits on the Scottish Vikings. Norsemen conquered most of the northern and western Scottish Isles, and slowly extended their influence into mainland Scotland in the 11th century. Unlike in England where most of the Norse culture only remains in the form of names, the Vikings introduced their practices to the native Scottish Gaels, as evident in some unique Norse-Gael artifacts. The Govan Church in Glasgow houses a series of hogback stones resembling the Viking longhouses, which were used to make Viking tombs look like mighty Norse buildings. These stones are not found in Scandinavia, but are unique to the British Isles. The hogback monuments reflect the Vikings’ adaptations to life in Scotland, thereby creating a new culture for themselves. 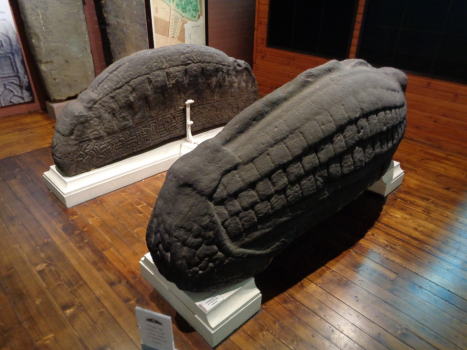 Hogback monuments at the Govan Church in Glasgow, Scotland

I also wandered to the small coastal town of Largs on a sunny summer day, where the Scottish won the final battle against the Norwegians in the 13th century, marking the end the Viking era in Scotland. One of Largs’ attractions is the Vikingar! Experience, which contains a Viking exhibit and an excellent video presentation about the historic Battle of Largs. Through the video, I could see the Scottish pride in their Viking heritage, because many who fought against the Norwegians were descendants of earlier Vikings who had integrated into the Scottish community. The interaction between the Norsemen and the Scottish Gaels contributed to the Scottish culture. It is not a surprise that the Scottish National Party has been pointing to Scotland’s Nordic connections to further emphasize a separate Scottish identity, thus pushing for the country’s recent independence movement from the United Kingdom. 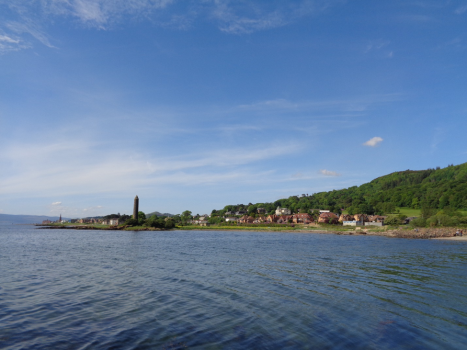 Largs, Scotland, with the Pencil Monument commemorating the last Scottish battle against the Vikings

The Viking-occupied Scottish islands together formed the Kingdom of Mann and the Isles, whose seat of power lay on the Isle of Man between Ireland and Great Britain. On this small island, now a self-governing community under the United Kingdom, the Viking influence still flows in everyday life, for it forms an integral part of the Manx identity. On the beaches of Peel, I enjoyed a cup of pickled herring, a Scandinavian delicacy inherited from the Viking age. The Viking government still survives until today, and is called Tynwald as derived from the Old Norse word for ‘the place of assembly’. The Manx people even paid tribute to their Viking roots by building the Viking long ship Odin’s Raven in the traditional way, sailing all the way from the Isle of Man to Trondheim in Norway. Strolling on the streets, one can find a Viking ship sculpture, or a Viking-inspired restaurant, illustrating the modern Manx people’s honor of their Viking past. 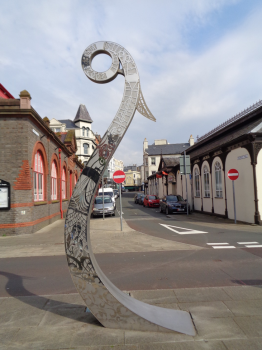 A Viking ship sculpture on the streets of Douglas, Isle of Man

Following the steps of the Viking, I continued my journey to Denmark and Norway, where I learned more about the Vikings’ way of life in their homeland. There, I could live my dream since my childhood and immersed myself in the world of the Norse gods and heroes. I was in awe to see the tales depicted in paintings on the walls of the Oslo City Hall in Norway. I stepped on a replica of a Viking longship at the Viking Ship Museum in Roskilde, Denmark, and marveled at the craftsmanship in building such immense boats. I tasted the mead drink inspired by the gods’ beverage on the streets of Copenhagen. Though Denmark and Norway have long moved away from their pagan roots, the Viking legacy is still alive and it is a celebration of the two countries’ shared history. 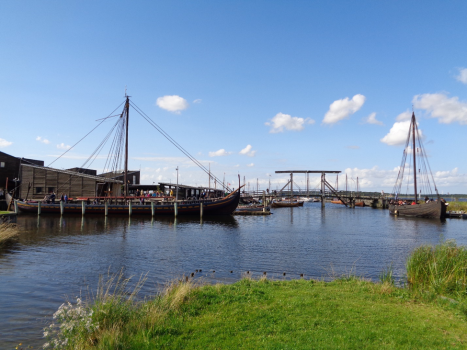 Thanks to the AMS program, I could embark on this unforgettable trip to learn about a subject that had interested me for over a decade. Every place I visited was different, but they were all tied by the cultural link to the Viking past. Though the influence on the modern society varies to a large extent, the Viking culture is never completely wiped out in any location, but it is integrated into the communities in one way or another. Furthermore, I would never though that I, a student majoring in Chemistry and Physics, would be able to study a historical topic completely unrelated to my academic track. In this way, the AMS program is certainly the culmination of my liberal arts education at Colgate.