The Story of Curious George 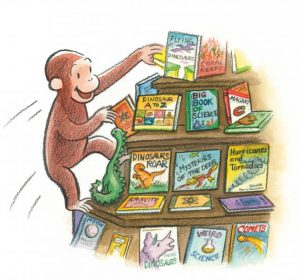 Here at the Bookstore, we love the stories about George, the curious little monkey who has captivated the hearts of children and adults alike for years.

On June 4th at 10am, you can come meet Curious George and The Man with the Yellow Hat yourself!

Drop in for a story time with curious crafts and monkey snacks. Curious George and The Man with the Yellow Hat will be available for pictures and high fives. This event is free, and open to children of all ages. The Colgate Bookstore proudly supports the joys of reading by donating 13% of all children’s book sales from this event to the Hamilton Public Library.

Here’s a little history behind the authors of Curious George.

H(ans) A(ugusto) Rey was born on September 16, 1898, in Hamburg, Germany. Margarete Waldstein (later known as Margret Rey) was also born in Hamburg, Germany on May 16, 1906. The two met and married in 1935 in Rio de Janeiro. Shortly afterwards, they moved to Paris, France, and it was there that Hans published his first children’s book. “Ragi et les 9 singes” (Cecily G. and the Nine Monkeys in English) was the mischief-making little monkey named Curious George’s debut.

Following the publication of “Ragi et les 9 singes”, the Reys decided that Curious George deserved a book of his own. But by this time, World War II had broken out, and the Reys – both German Jews – found themselves in great danger. Knowing their only chance was to escape Paris before Hitler’s armies took over, the couple fled the city on their bicycles, bringing with them only some food and five manuscripts. One of these manuscripts was the story of Curious George. Hours after their flight, the Nazis entered Paris, but the Reys were already safely over the French-Spanish border. From there, they eventually made their way to New York City, where they began a new life as children’s book authors.

“Curious George” was published by Houghton Mifflin in 1941, and immediately became so popular that his original story has never been out of print. George has since become one of the most loved and most recognizable characters from children’s literature.