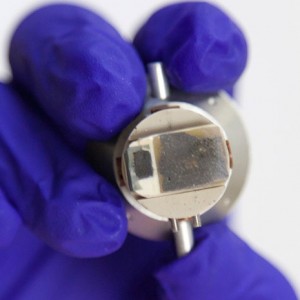 A fragment of the La Paz Icefield 02205 meteorite, which comes from the Moon, is mounted for analysis with the prototype dating spectrometer, alongside a smaller piece of glass which serves as a standard. Levine and his colleagues are investigating this lunar specimen to learn how best to date lunar rocks in situ on the Moon.

The institute is awarding a second year of funding to Jonathan Levine (Physics and Astronomy) and his collaborators F. Scott Anderson and Tom J. Whittaker (Southwest Research Institute), for their project: “Mineral Identification with a Prototype Dating Spectrometer for Spaceflight.”

The history of the planets is recorded in extraterrestrial rocks. However, most extraterrestrial rocks with known absolute ages are meteorites, whose precise origins are difficult to ascertain. A major objective of planetary science is to date planetary specimens whose geologic contexts are known, so as to determine the timing of specific events in solar system history, such as the volcanic eruptions that caused the craters that cover much of the Earth-facing side of the Moon.

To this end, a team including Jonathan Levine is building a novel mass spectrometer capable of dating rocks on the basis of the rubidium and strontium isotope abundances in their constituent minerals. This instrument is novel in that its components are all miniaturizable for spaceflight: the aim is to one day land it on the Moon or a planet, and to date rocks in situ.

The funded research would allow Levine’s team to develop techniques for identifying the minerals that they are dating, so as to optimally interpret the age data they obtain.