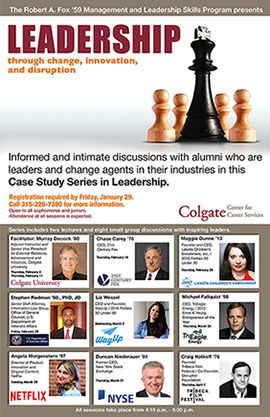 In early February, Senior Vice President for External Relations, Advancement & Initiatives Murray Decock ’80 launched his “Case Studies in Leadership Series” through the Robert A. Fox ’59 Management and Leadership Skills Program. The Case Studies in Leadership is a semester-long series of classes aimed at exposing 30 sophomores and juniors to aspects and elements of leadership of which they need to be aware in order to lead change, both on campus and in their professional experiences post-graduation. Decock facilitates the classes, eight of which include discussions led by guest lecturers from leaders in a variety of fields. Most of the lecturers are Colgate alumni: CEO of 21st Century Fox Chase Carey ’76, Founder and CEO of Lakota Children’s Enrichment, Inc. Maggie Dunne ’13; CEO of TriEagle Energy Michael Fallquist ’98; Senior Staff Attorney for Office of General Counsel in the U.S. Department of Veterans Affairs Stephen Redmon ’80; Director of Product Innovation and Original Content Angela Morgenstern ’97; CEO and Founder of WayUp Liz Wessel: Former CEO of New York Stock Exchange Duncan Niederauer ’81; and Founder of The TriBeca Film Festival Craig Hatkoff ’76.

Decock developed the series because of the great interest Colgate students expressed in wanting to understand not only the types of technical skills that they will need in the workplace, but also the breadth of leadership approaches and styles that they will need to develop and foster. Special emphasis is placed upon the idea that people can be leaders in a variety of areas, not just as the heads of companies, foundations, and community organizations, but in every endeavor to which they commit themselves.

Decock began the series by teaching a few sessions on the science behind emotional intelligence and by providing the background on a changing global marketplace to prepare his students for the guest lecturers. Class discussions focused on how students can develop a path forward based on core values, and how those values can lead some to take risks, experience failure, and learn from mistakes. Students have been highly engaged with the series, asking questions based upon the varying frameworks of leadership and how the lecturers have had to embrace different leadership styles in order to ascend to the positions they currently hold. The class has also addressed how many leaders have navigated their companies through industries that have been transformed in very short timeframes.

After pursuing and evaluating feedback on the first Case Studies in Leadership series, Decock plans to offer the program again next semester, and hopes to expand it to accommodate extensive student interest. Decock calls the series a “win-win” not just for students looking to develop connections with alumni, but also for Colgate alumni looking to become even more involved in helping students see the many paths forward with a Colgate undergraduate degree and a commitment to understanding and embracing opportunities for leadership.

“I have commitments from enough guest presenters for the next 5-6 semesters because there are so many alumni who are both leaders in their field, and who love to speak to Colgate undergraduates about the varying paths to success, how to make a positive impact on those around you, and why it is important to follow your passion while clinging to strongly-held core values,” Decock said.