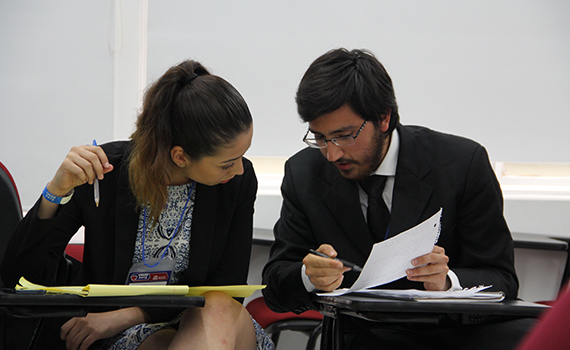 Valeria Felix ’18, a sociology major from San Diego, Calif., and Federico Elizondo ’17, a psychology and sociology double major from Laredo, Texas, participate in a Spanish debate practice round at the CMUDE 2015 debate tournament in Bogotá. (Photo by Daniel DeVries)

Debaters and judges from 20 countries, including Spain, Chile, Peru, Russia, and Germany gathered for this year’s Campeonato Mundial Universitario de Debate (CMUDE) in Bogotá, Colombia. Representing the U.S. for the fourth time, Colgate University’s Spanish Language Debate Society is the only U.S. team in the competition.

After our day of arrival, the Universidad de Rosario offered workshops for debaters and judges alike. Exalting principles of critical thinking and rhetoric, the CMUDE academy framed the tournament as a means to an end. In other words, CMUDE aims to better equip university students with the skills necessary to become global, active citizens. For example, this year, CMUDE had a workshop in which debaters from most countries formed delegations to talk about peaceful, post-conflict relations in current-day Colombia. CMUDE hopes that we, as debaters and judges, use our experience to contribute solutions to real-world issues.

In addition to encouraging the development of strong, clear arguments, CMUDE workshops highlighted the need for rhetoric in discourses. This inclination towards a persuasive form of delivery is a particular distinction between western debates like the World University Debating Championship, where rhetoric is not as important for guaranteeing a successful debate. Conversely, CMUDE believes that a debater/speaker must be able to provide a well-thought-out argument in the most clear and convincing manner that successfully convinces spectators.

After a practice debate round, our first day at CMUDE ended with a cocktail hour to socialize and interact with other participants. Colgate participants rekindled old friendships formed in previous tournaments and created a foundation for new friendships with university students from other countries.